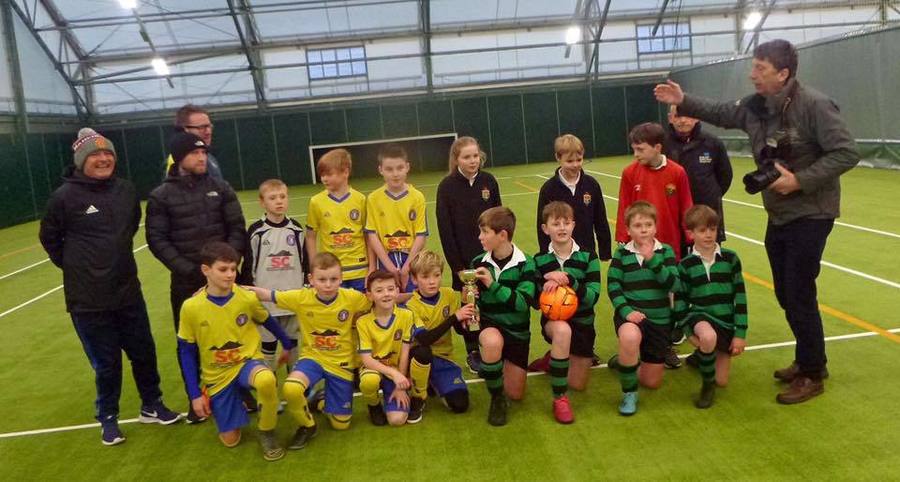 The school team recently took part in a North Down and Ards small schools’ tournament at the Blair Mayne Leisure Complex. We played 6 games in total in our first five-a-side tournament of the year. The team were impressive and produced some fine performances.

We started quite slowly against Newtownards Model and Sullivan Prep with a draw and a loss. We then produced a great performance against Castle Gardens and ran out 2-0 winners. The team then beat Londonderry Primary School to advance to a penalty shootout against Newtownards Model as we had the same number of points. We won our penalty shootout to advance to the semi-final against Kilcooley Primary. The team produced their best performance of the day and won 4-0 in a physical battle. Unfortunately, we lost by the same score line in the final against Sullivan Prep who were worthy winners. It shows the level that we have reached in recent times that we were so disappointed we couldn’t win the whole tournament. The team consisted of Ethan B, Jacob P, Ollie F, Callum J, Cooper K, Zach McK and Cameron H. Well done boys and a huge thank you to the adults who were able to assist with lifts on the day. Thank you to Mr Laverty for his continued support and coaching.

The school football team recently played on two Thursdays in a row recently with victories over Alexander Dickson PS and Carrickmannon PS in the league followed by another narrow victory over Kircubbin IPS on home soil at Abbey Villa.  The league victories see the team sitting on maximum points from 4 games played and the friendly victory saw us expand to the 9-a-side format for the first time.

The first football fixtures of the year took place at Londonderry Park on Thursday 3rd October with last year’s P4/5 team making the step up to the Newtownards Area Small Schools League. The first of two fixtures saw Storm Lorenzo descend on Londonderry Park with Sullivan Prep the opposition. battling into the storm in the first half the team went in at half-time 2-1 up thanks to an early strike from Zach and long-range effort from Joss.

The second game of the day was a tighter affair against Kilcooley. Kilcooley took a 2-1 lead into the break with Millisle feeling aggrieved at how the first half had unfolded. This spurred the boys into action and Ethan’s first half goal was added to by two strikes by Zach.

Player of the day was Zach.